A Day at the Park for Isaiah and I!

August 29, 2011
Isaiah and I had a beautiful day at the park last week.  It was Tuesday to be exact, because I was there when we had the Great Pittsburgh Earthquake of 2011.  I am quite sad to inform you that I didn't feel a thing.  Isaiah and I were probably frolicking through the field -- as much as a woman who is 30 weeks pregnant frolics -- beating on the ground with drumsticks (well, just sticks actually).  I guess that last part was probably just Isaiah.  We had been walking around the playground at South Park and he found sticks and was drumming.  He is quite the little musician, loves the drums and guitar.  Any sticks are drumsticks and can be used to play any available drumlike surface.

After our frolic and drumming venture, I finally sat down to relax for a minute with Isaiah, and I decided to check Facebook from my phone.  Bunches of people had just updated their statuses to say something about an earthquake in Pittsburgh, and then my AP app said there was an earthquake.  So I called Lauren, and she confirmed, there had been an earthquake.  I missed the whole thing, something I was pretty sad about since Pittsburgh doesn't really do natural disasters well.  A small tornado here, a little bit bigger flood there, a sizable thunderstorm on a regular basis, but negligible when it comes to earthquakes, volcanoes, hurricanes, and typhoons.  I suppose I should be more than excited about the lack of natural disasters, but I think a little bit of something to shake things up - pun very much intended - would have been neat!  Oh well.  I guess I will chalk up missing the Great Pittsburgh Earthquake of 2011 to the small not-yet-born baby girl routinely causing earthquake-like tremors in my lower abdomen several times an hour.  Stinker.

On to the real fun...  Pictures from my adventure in the park with Isaiah.  He has this *thing* lately with his boots.  For a few months now, he has had a pair of lovely green rainboots with caricatures of insects all over them courtesy of Gram E.  He hasn't taken much interest in them until the last few weeks, when he has enjoyed wearing the boots everywhere - the house, the park, Walmart, a birthday party, and so on!!  The boots are so cute on him, and his slight obsession with them makes me laugh, so I let him wear them wherever he wants.  So our adventure in the park pictures include Isaiah in boots...  Enjoy! 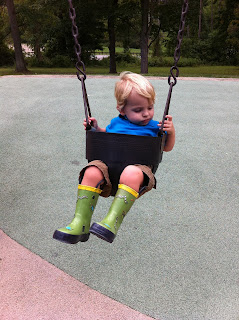 My babydoll swinging in the baby swing, boots on display! 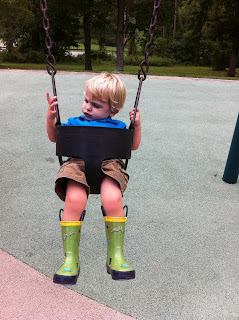 Hmmm, would you look at how this swing is built...  An engineer to be?? 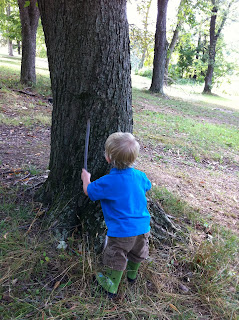 Drumming away, who needs a whole drumset when you have a tree and some sticks!! 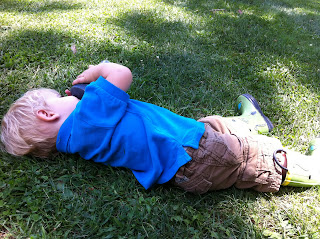 September 18, 2013
Isaiah has a newfound joy for story telling.  He asks John and I to tell him stories, and he also enjoys retelling stories that he hears and loves.  So we have told him the story of how mommy and daddy met, the story of when he was born and when his sister was born, and about the time that he drove mommy crazy when he was a colicky infant and wouldn’t stop crying in the backseat when mommy was stuck in rush hour traffic on Route 51.   That one was a nailbiter... ;) Just a few weeks ago, while he was taking a bath, he asked me to tell him a story, a new story.   And, well, I remembered a whale of a tale that he hadn't heard yet.   It just so happens that this story began eight years ago, one day late in August.    It’s a crazy story about a young woman who walked out in front of a minivan that was going at least 25 miles an hour.   She got hit, flew 35 feet in the air like a rag doll, landed in oncoming traffic, and survived to live another day.   But she was b
Read more

June 07, 2013
Now there are many people who rarely post on Facebook but read posts all day long.  They are the proverbial fly on the wall in the room that is Facebook.  Listening and watching for something juicy.  And if we are all honest, we can admit we have done it too.  We too have come across something juicy and called our husband or a friend to let them know the trainwreck that just happened.  And if you haven't ever done this, I suppose you either are really holy, or you don't have Facebook.   Just the other day, I had the privilege of running into a heated rant on leaving your kids in the car.  The rant was pretty emphatic about how people shouldn't leave their kids in the car, even to do a small task that would require the parent to walk away from the car for even five minutes, such as pick up another child at school.  And it got heated when another parent said that they did indeed leave their kids in the car to pick up another child from school, but that the doors are locked
Read more