So I think I have definitely been nesting lately, that strange part of pregnancy where you are beyond exhausted, but for some strange, unknown reason you want to clean, bake, dust, scrub the floor, wash dishes, sweep, vacuum, and wash and fold laundry. Not that you can accomplish all of it, but darn it, you will try!

Many of my escapades lately have involved baking and cooking.  I have made chunky cinnamon applesauce, crumble apple pie, chicken enchiladas, baked BBQ ribs, and pumpkin banana bread.  And that's all in about a weeks time!  Whew, I'm exhausted just thinking about it!

Now on to some recipes, specifically the apple crumble pie one.  In honor of fall, I have been craving all things apple and pumpkin.  If you know me, I'm a nut for anything pumpkin - pumpkin spice coffee, pumpkin pie, pumpkin spice lattes, pumpkin straight from the can.  And apples, Gala, Mutsu, and apple cider, I'm in heaven!  Oh fall, I love you!

A picture of the beautiful and tasty apple crumble pie I made... 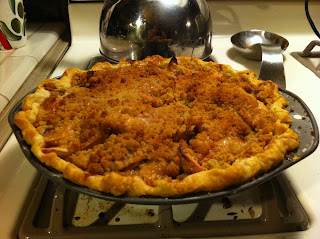 Fill pie shell with apple slices. Combine granulated sugar, cinnamon and nutmeg OR pumpkin pie spice, and salt; sprinkle over the apples. Combine topping ingredients until crumbly; sprinkle over top of pie. Bake at 400° for 45 to 50 minutes, until apples are tender and topping is browned.
---------

The original pie recipe comes from this website, but I made several changes, reflected in the above recipe.  I don't enjoy nuts in my apple pie or in the topping, so I excluded them.  I also doubled the crumb topping, because it's most delicious.  I happened to be out of cinnamon, so I used pumpkin pie spice, which was awesome!  I also made homemade pie crust, which my mom always used to make, rather than using a store bought frozen or fresh pie crust.

Now on to the pie crust!!

Ingredients:
Place flour in a medium bowl. Cut in shortening until mixture resembles coarse crumbs. Add water and mix just until dough comes together. Allow to rest in refrigerator before rolling out.
---------

This is a super amazing pie crust and I like to use it for all fruit or custard pies.  The recipe can be found at this website.  It's a crumbly and superb crust!  Note that it makes only one 9 inch pie crust, so double it if you want a top crust for your pie or if you are making two pies.  It's important to use cold water or even ice water when mixing the crust.  My mom taught me how to make this pie crust, and it's been one of the best I have ever had!

Now, just writing this blog makes me want to make another apple pie, and I have some beautiful Mutsu apples from Simmons Farm to use up!!  The only trouble with apple pie at my house is that John isn't a huge fan of fruit, even in pie form, so I am the only one who eats it!  So if anyone wants to come over for some apple pie, I'm up for company!!
adventures in baking apple pie baking crumble apple pie food recipes

September 18, 2013
Isaiah has a newfound joy for story telling.  He asks John and I to tell him stories, and he also enjoys retelling stories that he hears and loves.  So we have told him the story of how mommy and daddy met, the story of when he was born and when his sister was born, and about the time that he drove mommy crazy when he was a colicky infant and wouldn’t stop crying in the backseat when mommy was stuck in rush hour traffic on Route 51.   That one was a nailbiter... ;) Just a few weeks ago, while he was taking a bath, he asked me to tell him a story, a new story.   And, well, I remembered a whale of a tale that he hadn't heard yet.   It just so happens that this story began eight years ago, one day late in August.    It’s a crazy story about a young woman who walked out in front of a minivan that was going at least 25 miles an hour.   She got hit, flew 35 feet in the air like a rag doll, landed in oncoming traffic, and survived to live another day.   But she was b
Read more

June 07, 2013
Now there are many people who rarely post on Facebook but read posts all day long.  They are the proverbial fly on the wall in the room that is Facebook.  Listening and watching for something juicy.  And if we are all honest, we can admit we have done it too.  We too have come across something juicy and called our husband or a friend to let them know the trainwreck that just happened.  And if you haven't ever done this, I suppose you either are really holy, or you don't have Facebook.   Just the other day, I had the privilege of running into a heated rant on leaving your kids in the car.  The rant was pretty emphatic about how people shouldn't leave their kids in the car, even to do a small task that would require the parent to walk away from the car for even five minutes, such as pick up another child at school.  And it got heated when another parent said that they did indeed leave their kids in the car to pick up another child from school, but that the doors are locked
Read more